This post details my findings tearing down the Lifan E3 electric moped I bought about a month ago. I have some modifications in mind for it, and I reasoned my findings might be useful to someone else who comes across this post.

My Lifan E3 is configured as a class 2 moped under EU law. This means a top speed of 25 km/h and 1 kW nominal motor power ("märkeffekt"). It also means it's legal to drive wherever bikes are allowed, unlike class 1 mopeds. It is sold under the brand "Viverra".

This post have been updated a few times for new information. See the end of this post for details about what updates have been made.

On to the teardown itself. In the words of Dave Jones: don't turn it on, take it apart!

Here is a selection of tools useful for disassembly:

Most of the fasteners are PH screws, with some hex screws thrown in. I quickly found out the provided hex key is made from Chinesium, which got rounded off from trying to loosen some particularly well-torqued screws. An IKEA hex key works better.

There are also some hex head screws of various sizes. Some of these are hard to get at. Use a suitable socket wrench.

There's a bajillion screws holding everything together, and some of the panels slide into eachother. This makes removing say the rider treadle incredibly tedious.

There is already some surface rust visible on some of the larger hex head fasteners. Perhaps they are made from the same grade of steel as the hex key? For now I have cold galvanized them by spraying them with zink spray.

There's three main things going on at the rear of the vehicle: lights, suspension and the motor/rear wheel.

Nothing special, just a bunch of high-power LEDs.

The rear is suspended by a combination of a pair of progressive springs and hydropneumatic damper/spring devices. They are not adjustable, despite what the manual claims.

The motor is a 10ZW6065317 hub motor from Bosch, with a nominal voltage of 60V. It has eight wires coming off it: three for the windings, two for sensor power and three for Hall effect sensor signals. This is in line with the schematic.

To remove the rear wheel you'll need a 24 mm socket and an 8 mm open or combination spanner. You'll also need to disconnect the windings and Hall sensor connector from the ESC, see the ESC section.

First loosen the 24 mm hex nuts. You may need to hold the frame while applying torque on each nut. Just kinda manhandle them into submission. Remove the nuts and lock washers, then remove the 8 mm hex screws and the slotted plates. Note the orientation of the circular locating plates on the inside on either side of the fork. The rear wheel can now be pulled off.

The middle part contains many things, all of which are under the seat. Accessing these involves removing the battery compartment (six hex screws) and the panel holding the charge port (three PH screws).

The right side has the DC/DC converter, blinker relay and fuses. The front part has the electronic speed controller (ESC) and the charging port. The rear part has the automatic circuit breaker.

The ESC is located under the seat, in front of the battery compartment. It is marked:

The ESC has the following things connected:

Both the ESC and the motor are more capable than required for class 2. Power and max speed are limited by software in the ESC.

Let's move on to removal and disassembly. 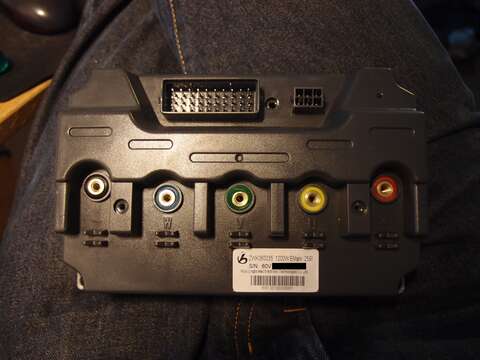 To proceed you'll need a set of PH and flat head screwdrivers and an 8 mm combination or ring spanner. Use the ring end of the spanner to loosen the hex screws. There is not enough room to use an open spanner.

To disassemble, remove the five PH screws holding the ESC together, one on the front and four on the back. Use some flat head screwdrivers to pry the plastic case off the heatsink. The colored rings that the screw terminals jut out of are rubber seals which are what's resisting the prying.

Once the case is removed, the guts of the unit are revealed: 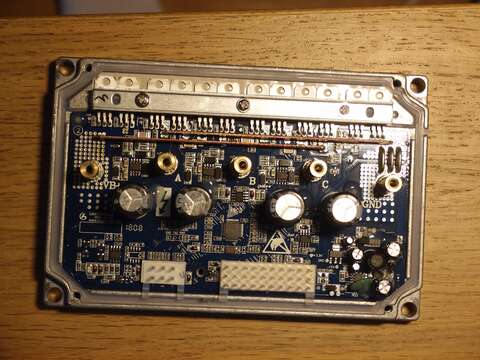 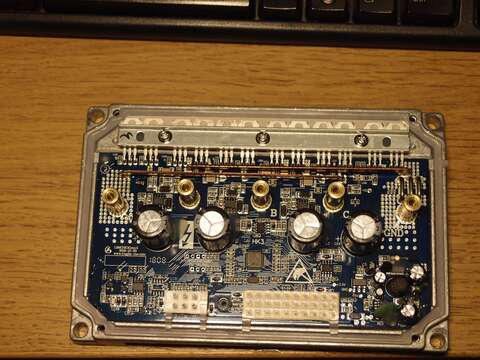 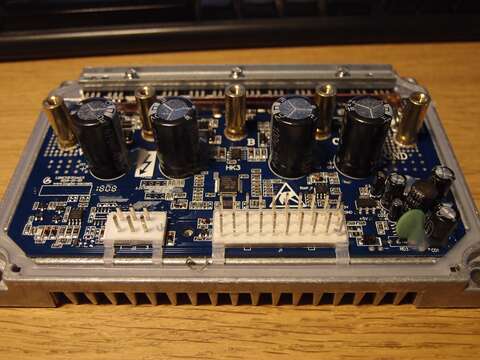 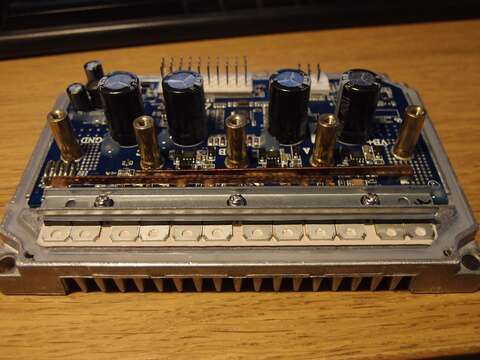 The bottom left has some informative markings: 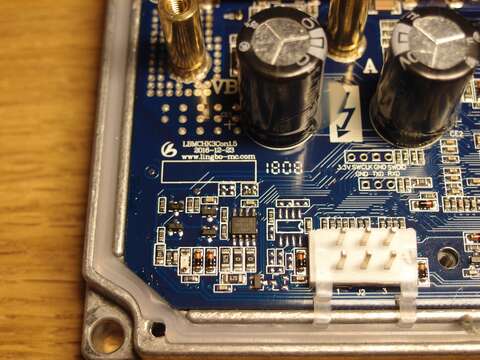 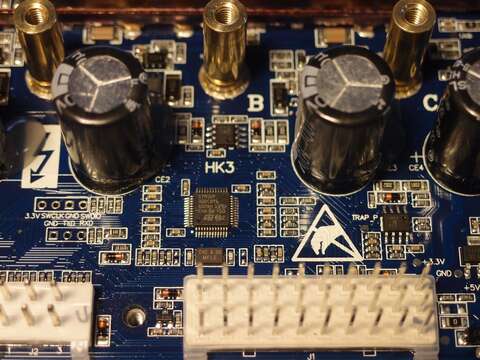 There is an STM32F microcontroller in the middle of the board with these markings:

The STM is clocked by an SMD crystal marked "TXC 8.00 MFLE".

There are some 0 Ohm resistors and unpopulated footprints around the STM, possibly for configuration. There is a TJA1057 CAN transceiver in the lower left of the board. This is likely used to talk to the speedometer/display. There is an SO8 in the lower right marked

This is likely a buck converter. There is a "+15V" label nearby. There is a nearby SOT-223 marked:

The logo looks like "LI" stylized. A test point marked TRAP_P sits nearby. There is a second C32 just north of the STM. Both C32's have two diodes around them, some resistors and some capacitors.

There is space for two debug headers to the west of the STM, one 4-pin and one 3-pin. The 4-pin one's pins are marked "3.3V", "SWCLK", "GND" and "SWDIO". A synchronous bus of some kind, maybe I2C or something for programming the STM. The 3-pin one's pins are marked "GND", "TXD" and "RXD". Likely a 3.3V UART. Neither of the headers are connected to the CAN transceiver.

There are three MOSFET drivers marked

Each of them likely drives four of the MOSFETs each. Here is a datasheet: link

In the upper right there are three links. Nearby are the labels "RSA", "RSB" and "RSC". This likely means that the three links are shunt resistors for sensing the current going through each motor winding. I don't have the equipment necessary to measure their resistances.

There is a horizontal row of screw terminals in the middle of the board, marked "VB+", "A", "B", "C" and "GND". Along the north of the board there are two copper bars, going from VB+ and GND respectively, about 2/3rds of the board in either direction. Finally, there are twelve MOSFETs along the top of the board.

The Hall effect sensors port has three pins, of which five are used. The following schematic shows the pin assignments I've been able to deduce so far: 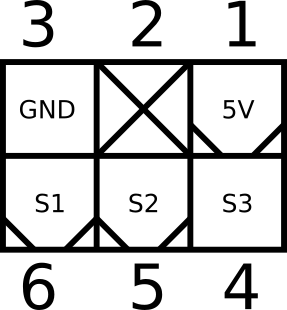 This image is looking at the port, not the plug. Pins 1-3 match the orientation of J2 on the PCB. Pins 4-6 are not marked, so I'm picking the same right-left order for them. In other words pins are counted right-left, top-bottom. Pin 2 is unused and lacks a socket on the plug side. Pins 1, 5 and 6 are polarized so the plug cannot be inserted the wrong way. The following table details my understanding of each pin's function as of 2019-11-11:

I may have messed up the measurement on S1, hence why it is negative. I'd need some kind of jig to scope these signals out properly. S1...S3 measure 3.3V on the socket side, likely due to pull-up resistors. It is possible pull-ups are required to get proper signals.

The period of the signals is somewhere around 10°. Certainly more than a few cycles per revolution.

The charging port in front of the seat uses the same 5-pin jack connector as the battery. Only three pins are actually used: positive, negative and the middle "G" pin (purple wire). This corresponds well to the FCC photographs of the innards of the charger, which show that the charger's cable only has three wires. The schematic given in the manual only shows the power pins being connected, not the G pin. There is continuity between the G pin and a purple wire going to a pin on the main ESC connector. There is no continuity between the G pin on the charge port and the corresponding pin on the battery connector. So what is the G pin for?

My best guess is that it's for a temperature sensor in the battery.

A DC/DC converter is used to produce 12V from 60V. It is held in place with two 10 mm hex nuts. It has four wires connected to it, which is one more than the schematic claims.

Two wires (black and red/black) have continuity between eachother and battery negative (B in schematic). The white/red wire seems to be battery positive (RW in schematic). The red wire would then be the +12V output, but it is marked as RB in schematic for some reason. The flasher has a red/black, a black and a gray wire going into it, which would contradict that. So a minor mystery here, but nothing a little bench experimentation can't sort out once the converter has been removed.

2020-04-14 update: There is actually not a dead short between black and red-black, it measures 3.2 ohms. Red-white measures 0.3 ohms to battery positive when ignition and the automatic fuse are "on".

The converter's housing has two sets of markings. One set is in Chinese which I cannot read, the other is the following:

The connector is marked ZH15-31SH. Pin 1 is marked inside the housing. Based on the above I have come up with this hypothetical pinout (pins are counted left-right top-bottom):

That the control signal is 60V is surprising. It has continuity with the red wire on the ESC connectors.

Measuring them with a multimeter in diode mode give the following voltage drops:

"From" means red probe and "to" means black probe.

I do not yet know the maximum current that the converter can output. Based on its size I'd say somewhere between 5-10A.

The flasher has three wires: black, red/black and gray. Black has continuity with red/black, both on the flasher and on the DC/DC connector. There is only two wires in the schematic (RB and Gr).

The fuses have two wires, both red.

The front has these things going on: ignition key, USB power outlet, controls, lights and the front wheel.

The ignition key has some wires sticking out of it, likely going into the ESC. It also has a Bowden cable going to the lock under the seat.

There is a USB jack in the bottle/phone holder, which I hadn't noticed before performing this teardown. This implies presence of a +5V bus, which the schematic also claims.

The accelerator handle is connected by Bowden cable to a box containing a Hall effect sensor. The sensor is marked:

Judging by the internets, this is a common 49E sensor with the following pinout: 1=Vcc, 2=GND, 3=Analog out. Cable colors supports this. Vcc should be in the range 3 to 6.5 V.

Twisting the handle turns a plastic piece in the box, with a metal strip mounted to it. This metal strip is likely progressively magnetized.

The front wheel is held in place with a 220 mm long threaded bolt with a 15 mm hex head. The threaded end is fastened with a 16 mm hex nut. You'll need to use two spanners, adjustable or fixed, one on either end, to loosen the bolt. There are two collars on the shaft used for locating, be careful not to lose them.

Putting everything back together was surprisingly easy. I have not yet figured out how to remove the rider treadle. There are some loose connectors under it which I'd like to investigate.

If you have more information about Lifan's electric scooters, feel free to contact me!

Added more information about the DC/DC-converter.

Added information about hex sizes on front and rear wheels, a list of tools, information on how to remove the ESC, and a rough look at the layout, component choices and features on the ESC.

The Hall effect sensor section was mirrored, to correspond better to the pin assignments on J2 on the PCB.