The last year or so I've been interested in liquid metal batteries, also known as molten salt batteries. The idea is to use a molten salt as an electrolyte instead of a water-based electrolyte, and molten metals for the anode and cathode. Because of differences in density of the materials, they spontaneously separate into layers. Also because all three components are molten, these cells should be capable of an unlimited number of cycles.

One downside to this style of battery is the high temperatures necessary. Magnesium for example melts at 650°C. This means a lot of insulation is necessary to hold in the heat. The bigger the cell, the more active material there is relative to the amount of insulation (square-cube law). A single cell is likely to weigh several tons. For this reason liquid metal batteries are best suited for stationary applications, for example grid energy storage.

There is a vast amount of combinations of materials one might use for these kinds of cells. In the following sections I will summarize what I consider some candidate materials based on wholesale prices found on alibaba.com. For many of these materials it is beneficial to form eutectic mixtures, thus lowering system temperature.

In the literature halogen salts are the most common electrolytes. Personally I've experimented with eutectic mixtures of the following (melting points in paretheses):

These are all safe and non-toxic. BaCl2 is another candidate salt mentioned in the literature, but its toxicity means I avoid it for now. LiCl is another one which I avoid, but for geopolitical reasons. Lithium seems to have become a conflict metal.

It is possible to use non-metals for one or both electrodes. I have not investigated this, partly because I have not found literature detailing reduction potentials for non-metals in their molten salts. Sulfur to me is the most interesting candidate of the non-metals, possibly using sulfate salts as electrolyte. It is however more difficult to work with due to SO2 fumes.

To test these ideas I have constructed some cells using borosilicate test tubes, heated either by kiln or propane torch. An example cell is shown below: 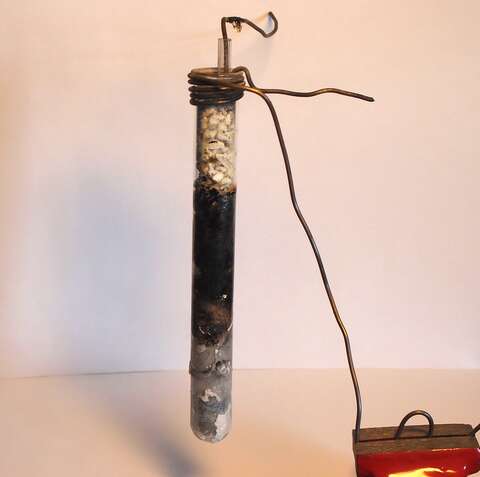 The above is a Zn | NaCl-KCl-MgCl2 | Ca-Mg cell, cracked due to thermal stress. The white and black part is the cathode, the gray below is the salt and below that is the zinc. Before the cell cracked I was able to measure a cell voltage of 1.003 V across a 2.2 kΩ load and a short-circuit current of 60.0 mA (23.6 mA/cm²). Both voltage and current increased as temperature increased, until the cell started cracking enough for the electrolyte to leak out.

I am not sure whether the calcium participates in the cell at all. If it did I would expect a cell voltage of 1.9 V, whereas Zn||Mg alone should be 1.1 V. Part of the problem here is that I only have calcium turnings available, whereas the magnesium is powdered. The magnesium is there only to form a eutectic. Another problem with this cell is that the calcium quickly oxidizes to CaO, visible as the white stuff in the top of the test tube.

It is possible that I'm not getting the temperature high enough for the cathode to melt correctly. Rather than setting up a kiln I merely heated the cell in air using the torch, like the arranged photo below:

To properly use calcium I would likely have to set up a cell in an inert atmosphere. This is unfortunately beyond my current means.

I have more chemistries to experiment with, and I'm slowly building confidence in my technique. I will need a logging bench multimeter of some kind to evaluate cells over longer periods of time, preferably a multimeter that sigrok supports.

Finally, this idea is nothing new - there is a company called Ambri that does exactly this using magnesium as the cathode and an antimony-lead eutectic as the anode (Mg||Sb-Pb). This is indeed a chemistry that shows up as a possible candidate in my calculations, but Ca-Mg||Sb-Pb would be superior to it, if an inert atmosphere can be maintained. For the melting point of Ca-Mg the lead in the anode is redundant, so the cell could be simplified to Ca-Mg||Sb.