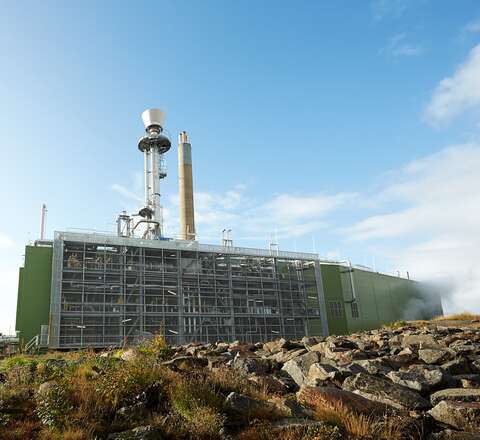 I recently learned of the GoBiGas project, an experimental gasification plant constructed by Göteborg Energi operated between 2014-2018 and mothballed since then. The idea is to turn biomass in the form of wood pellets and bark into methane (CH4) at a rate of 20 MW (0.55 m³/s or 0.36 kg/s). This ties heavily into something called bioenergy with carbon capture and storage (BECCS), which is likely to be one of many important technologies to reverse global warming.

Since GoBiGas is a publicly funded project, lots of useful information is available in its English-language final report here. In this post I turn the in-kind data available in the report into technical coefficients. 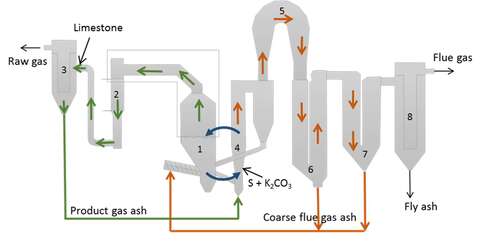 The gasification process can be summarized as follows:

The mix between H2, COx and C can be controlled by varying the amount of O2 and H2O injected into the gasifier in proportion to the carbon in the biomass:

Note that the reduction of H2O to H2 + O2- is endothermic. Obviously the less water and oxygen that is injected the more carbon is produced. The biomass itself contains oxygen and hydrogen chemically bound in cellulose and lignin, and water as moisture. It is beneficial to dry the biomass prior to gasification, both in case of biochar production but also for gasification as the report reveals.

In the GoBiGas plant the syngas is turned into CH4 by hydrogenating the COx gas. This is done in the methanation section shown in figure 2.5 in the report. These chemical processes can be summed up as:

Alternatives to methanation are burning the syngas or turning it into oil in a Fischer-Tropsch reactor. The latter is useful as an alternative to liquid fossil fuels.

Extra H2 could be supplied via for example electrolysis of water, resulting in more hydrocarbons and less CO2, if the electricity comes from a fossil free source like on-site photovoltaics.

The plant also produces various other chemicals as byproducts including BTX (benzene, toluene and xylenes). These are useful in their own right, but are presently simply fed back into the reactor and burned. 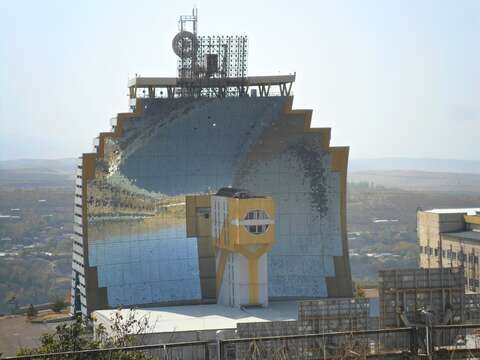 The heat for the gasification step can come from anywhere, so long as it is of high enough temperature (> 700°C). In the GoBiGas plant part of the feedstock is burned for this purpose, releasing CO2. The report reveals that as much as 70% of the carbon is wasted in this way. If solar heat is used instead then the carbon sequestration potential increases. If my calculations are correct then these 70% correspond to somewhere between 24-28 MW of heat. Assuming a solar constant of 1 kW/m² this is no more than 2.8 ha of (normal) solar collecting area.

A plant utilizing solar heat has the potential to be superior to more low-tech alternatives like slash-and-char.

Gasification can be carbon negative, especially if done together with comprehensive economic planning. The GoBiGas plant is merely carbon neutral. Furthermore it is limited by being embedded in bourgeois society. This limitation is revealed in the project's page on the Göteborg Energi website:

The plans for the second stage were shelved in 2015 when the biogas market had not reached the development that was forecasted in order to reach profitability in the project.

In other words: new public management demands that even efforts toward climate change mitigation be subservient to the whims of the market. Nevermind climate change reversal.

For working out the technical coefficients we need to know what temporal granularity we're after. The plant has a start-up time of "a couple of days" (section 3.5) or "5–7 days" (chapter 18). Whatever the number, this is a non-convexity as far as planning goes. Regular maintenance would have to be scheduled, and it would likely be beneficial if the plan solver had the flexibility of setting the maintenance schedule within given constraints. For now I presume steady-state operation.

At least three people were required to run the plant. Despite the poor work environment with so few people, I will use this number for lack of a better one. Three people per shift means that each hour corresponds to 10,800 worker seconds. Section 3.4 of the report provides information on consumables from which we can construct the following table:

Where the table in the report has a range of values I have used the larger values in all cases.

The wood pellet consumption figure is based on a carbon utilization of (section 3.5), the 0.36 kg/s figure at the start of this post and dry wood being 50% carbon by mass (source), all divided by three. CO2 is similarly based on . In this presentation at 36:40 it is stated that the plant consumes 6 tons of fuel per hour which translates to 556 g compared to the 600 g figure above. Close enough.

Some of the materials listed here, like the olivine and potassium carbonate, act as catalysts that would likely be recycled over time. In particular the potassium acts to suppress the formation of tars. In the presentation linked in the previous paragraph sulfur is also mentioned as a catalyst, but I find no mention of added sulfur in the report. Presumably the biomass contains enough sulfur as is.

There is also waste heat that can be used for municipal heating. Making use of this heat (co-generation) supposedly brings the efficiency of the plant to 90%.

As mentioned in the chemistry section, if less water and oxygen is introduced into the reactor then biochar (carbon) tends to be formed. With an appropriately designed plant one could have a "dial" that controls how much of the biomass gets turned into hydrocarbons and how much gets turned into char. GoBiGas is not designed for this particular use case, but for illustrative purposes I will try and guesstimate technical coefficients for this application as well.

The report mentions a theoretical maximum carbon utilization of . Let's assume things work exactly like this for biochar since it makes for more interesting technical coefficients. The reactor can be powered by the syngas given off naturally by the oxygen and hydrogen chemically bound in the fuel. Everything coming off the fuel gets burned, including tars, so there is no need for filtration. This removes the need for olivine and potassium carbonate as well. Presumably process water and purge gas aren't necessary either. This leads to a very much simpler set of technical coefficients:

There is a mass discrepancy in this table due to oxygen from the atmosphere not being accounted for. The oxygen in the carbon dioxide and water adds up to 672 g while the wood only contains 264 g. We could therefore if we like add a row for -408 g atmospheric O2.

The average site productivity (bonitet) for forests in Sweden is 5.5 m³sk/(ha*y) distributed over 22,125,000 ha (SLU, table 3.11a) or 122 Mm³sk/y. This corresponds to roughly 44.7 Mton carbon or 164 Mton CO2 per year if all parts of the trees are used and burned (skogssverige.se). Sweden's emissions as of 2020 are 46.3 Mton CO2 equivalent (naturvardsverket.se). Clearly there is great potential here even for a country that gets comparatively little sunlight as Sweden.

Some readers might object that most of these trees get turned into useful lumber that shouldn't be burned or charred, and they'd almost certainly be right. But eventually that lumber turns into scrap wood which is burned at present rather than charred. So when looking at the whole lifecycle of forest products it appears that a net sequestration of Mton CO2 per year may be possible, which is clearly more than 46.3 Mton. There is even enough room there to turn some of the wood into biofuel.

Finally there are other potential sources of biomass. Hemp in particular seems able to sequester 20 tons of CO2 per hectare per harvest (jordbruksverket.se, hemp.inc) compared to wood's tons/(ha*y). Unfortunately the powers that be in Sweden hate hemp and do all in their power to defy legalization directives from the EU.

Addendum (2022-06-23): I see in my notes that algea is another possibility which I think I should bring up here. This paper by Yusuf Chisti suggests that CO2 sequestration could be as high as 50 t/(ha*y) in an algea farm. Optimal bioractor design is still somewhat of an open question. But a simpler alternative might be possible: harvesting algal blooms. This would have a dual benefit: sequestering greenhouse gasses and reversing eutrophication. Various systems for doing this already exist on the market. The resulting algal sludge can be further dried in the sun and then gasified.

News articles, seminars and other material

There is a bunch of coverage of the GoBiGas project, some positive, some negative and some inbetween. Most of these are in Swedish. I have translated the titles to English. There are more articles than these but they were paywalled and so I have not linked them.