Yesterday a friend of mine gave me his Marshall Stockwell wireless audio player/amplifier to try to debug and fix. The battery in it would take a charge, and the charging LED would pulse, but the unit itself wouldn't start.

Taking the unit apart and removing the small PCB covering the top left portion of the main PCB, we are greeted with this: 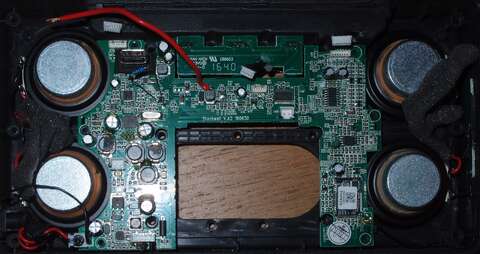 The two wires and the through-hole resistor are bodges of mine done during testing. I also had to snip the IC to the right of the red bodge wire, which was the 3.3V DC/DC regulator.

Some initial measurements showed that the 5V rail was dead and that Q4, the P-channel MOSFET that enables the 15V supply for the rest of the unit, would not turn on. Some time during my investigations the 3.3V switching power supply also broke.

Q4 was easy enough to turn on, just a 10k resistor from its gate to ground. I hooked up an external power supply for the 3.3V rail and let the unit run for a while.

After some time had passed, I noticed the current draw on the 3.3V rail went from 500 mA down to around 400 mA. Most of this current was going to a single 5.8 Ohm resistor, R25, which appears to be connected to a diode elsewhere. Unsoldering one of R25's legs reduced the current to around 80 mA, much more reasonable.

Despite turning on Q4 and feeding the 3.3V rail the 5V regulator would not turn on. The pin on U2 which I suspect to be the "enable" pin measured 0V. The "input" LED would however light up.

I have some more tricks up my sleeve to try and resurrect this thing. For now hopes are slim.

I have summarized what components I have identified on the board in the hopes that it might be useful for someone in the future:

The unit has two 3.3V supplies: one linear, connected to all analog audio chips, and one switching, connected to the logic, buttons and potentiometers.